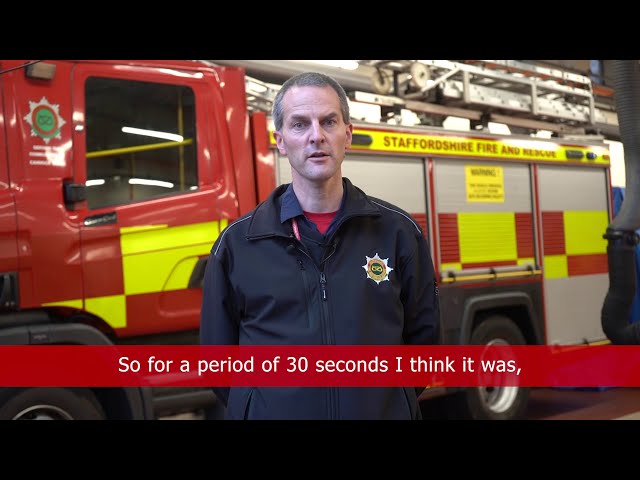 “For those seconds after the blast, I truly thought I was looking at the real prospect that four colleagues had been seriously injured or worse.”

Those are the words of Station Manager Gary Fox, who was the Incident Commander at a house fire in Stafford caused by a faulty dehumidifier in 2013.

It’s especially important to check appliances of elderly relatives, especially now as we are all spending a lot more time in our homes due to the coronavirus pandemic.

As residents gear up to hit the Black Friday and Cyber Monday sales, Staffordshire Fire and Rescue Service is launching Watts The Danger, a two month electrical safety campaign highlighting the many ways residents can protect themselves from suffering a fire at home. To demonstrate just how important it is to register your household appliances with the manufacturer Gary has spoken about what happened that day.

In the last five years there have been 835 fires in Staffordshire homes involving electrical items. Top causes include wiring, cabling, plugs, tumble dryers, washing machines, fridges/freezers and batteries/generators. Three people have died as a result of these fires and a further 121 people were injured. It’s the second biggest cause of fires in the home and with more of us working from home there’s never been a greater need for residents to be aware of the dangers.

Recalling that day Gary said: “It was a normal day, 9th September, nothing out of the ordinary.

“We’d been to one house fire earlier in the morning and then received the call for this incident just after midday.

“When we got to the terraced property on Marston Road, Stafford, the occupier was outside on the pavement, unsure where the fire was coming from, but had made his way out after the smoke alarm had gone off.

“I sent two colleagues with breathing apparatus and a hose reel into the house to try and locate the fire, along with two other colleagues when they arrived from Rising Brook.

“I was with a colleague outside the property when we saw conditions change – there was a lot more smoke leaving the house, the volume and energy of which were quite concerning.

“We were just about to call the crew to evacuate them when I saw a rapid expansion of smoke coming from the hallway through the open front door, close to where I was standing.

“As I had previously been a fire behaviour trainer, I knew what was coming next, and just about managed to turn my back in time before part of the front of the house exploded.”

Fire damage to the property front

SM Fox said he expected to be injured by falling rubble and couldn’t believe he emerged from the debris unscathed.

“I immediately felt sick to my stomach and was very worried about my colleagues.

“For those seconds after the blast, I truly thought I, was looking at the real prospect that four colleagues had been seriously injured or worse.

“I entered one of the fire appliances to send an emergency message, when I saw two dazed and blackened colleagues emerge from the property, with the other two about 30 seconds later.”

The crew had survived the explosion by being on the staircase to the first floor of the property, which, in the blast, had acted as a chimney, allowing for the gases and smoke to escape.

Burnt dehumidifier - the cause of the fire

A subsequent investigation discovered the fire had started in a dehumidifier in the basement.

The dehumidifier had been on since around 8am, the owner said after the fire, and unknown to them, had been recalled by the manufacturer due to safety concerns.

The blast caused significant structural damage to the front of the house and was so powerful, it raised the ceiling in the front bedroom and demolished the wall in the front garden.

“This was an extreme and rare event, but shows the importance of ensuring appliances in the home are registered with the manufacturer,” SM Fox said.

“It’s especially important to check appliances of elderly relatives, especially now as we are all spending a lot more time in our homes due to the coronavirus pandemic,” he added.

Anyone who wishes to check and register their appliance should visit Electrical Safety First. For more information and advice visit the Watts The Danger webpage.