Over forty firefighters have worked to extinguish a large fire outside of a chemical storage site in Cannock.

At 6.20am today (Monday 5 September), the Service received reports of a large fire in the forecourt of an industrial unit on Walkmill Lane.

The facility contained a large number of highly-flammable chemicals which had ignited as a result of the blaze. 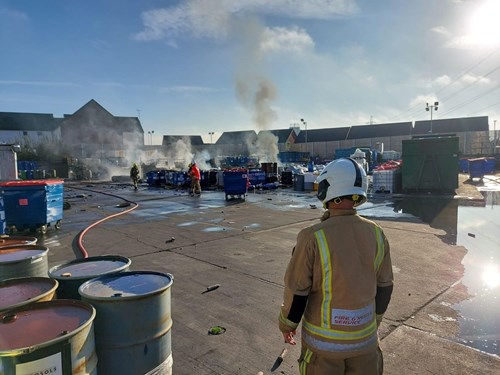 Crews from Rugeley, Burton, Stafford, Stone, Cannock and Hanley were sent to the scene alongside colleagues from Staffordshire Police and immediately began to evacuate residential homes on Haling Way and surrounding areas.

Four main jets and six breathing apparatus were used to bring the fire under control, which has been deemed accidental.

By 8.20am, the incident was scaled down, leaving crews from Rugeley and Stafford at the scene.

Station Manager Jordan Money, who attended the incident, said: “Crews have worked diligently to bring this fire under control and mitigate damage in the area.

“Although nearby residents can now return to their homes, we are still advising them to keep windows and doors shut whilst our crews remain at the scene and ensure the area is safe.”