A Burton man is backing a campaign to highlight the dangers posed to emollient cream users who smoke.

I'm supporting this campaign as I want everyone who uses these creams to know the risks. Don't smoke when wearing clothes that could have the cream on, or near bedding or furniture it has soaked into. And avoid open flames at all costs. It could save your life.

The plea comes exactly one year after Robert Evan’s aunt Maureen Milton died in a fire in Burton. 74-year-old Maureen used emollient creams for ulcers on her legs and was a heavy smoker. Around 9.15am on 18 August 2019 Maureen tried to light a cigarette with a match but her nightdress caught fire.

Robert said: "Before this happened to Maureen I had no idea these creams made clothing so flammable. More people need to know how dangerous it is to use emollients and smoke.

"After my uncle died Maureen didn't leave her flat much and her health was getting worse. I was horrified when I found out what happened to her, she must have been so scared.

"I'm supporting this campaign as I want everyone who uses these creams to know the risks. Don't smoke when wearing clothes that could have the cream on, or near bedding or furniture it has soaked into. And avoid open flames at all costs. It could save your life."

Jason Dean, who investigated the fire, said: "It’s always difficult investigating fires where someone has died, especially tragic incidents like this which could have been prevented.

"Firefighters found Maureen collapsed next to the lounge door. They rescued her from the smoke filled flat but she had suffered such serious burns that sadly nothing could be done to save her.

"When examining the lounge I found emollient cream next to the chair where Maureen had been sat. Burn marks showed this was where the fire started, with the remains of a match also found. The fire spread to nearby furniture where Maureen collapsed and the ceiling was also badly soot stained showing how fiercely the fire burned." 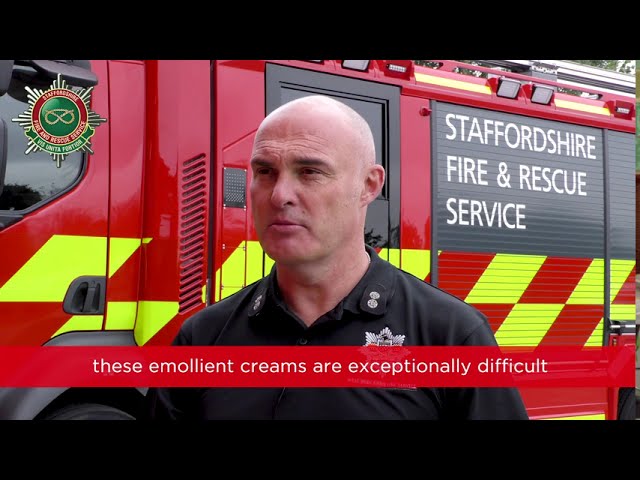 The plea comes after research by Anglia Ruskin University, De Montfort University and the National Fire Chief Council’s (NFCC) Emollient Group has proven that both paraffin and non-paraffin emollients act as an accelerant when they're absorbed by clothing and exposed to flames or other heat sources.

Now the Medicines and Healthcare products Regulatory Agency (MHRA) has partnered with the NFCC, Fire and Rescue Services and health charities to raise awareness of the fire risk and the precautions that need to be taken by users of skin creams.

In the last 10 years in England at least 56 people who have died in fires used emollients.

Emollient products are often prescribed for skin conditions such as psoriasis, eczema, bed sores and ulcers. They are safe to use but can soak into clothing and bedding leaving a flammable residue. If exposed to a flame or a heat source, such as a cigarette, lighter, gas cooker, heater or fire, the fabric can catch fire and spread quickly which can result in serious injury or in Maureen's case death.

The armchair where Maureen was sitting when the fire started

What exactly are emollient skin products?

They are moisturisers which contain paraffin, shea or cocoa butter, beeswax, lanolin, nut oil or mineral oils. They they work by covering the skin with a protective film or barrier which keeps the moisture in.

If I use emollients what can I do to make sure I’m safe?