“It only feels like yesterday when I first walked into Cheadle Fire Station as an on-call firefighter. Thirty years later, hanging up the helmet for the final time; it was quite emotional.” 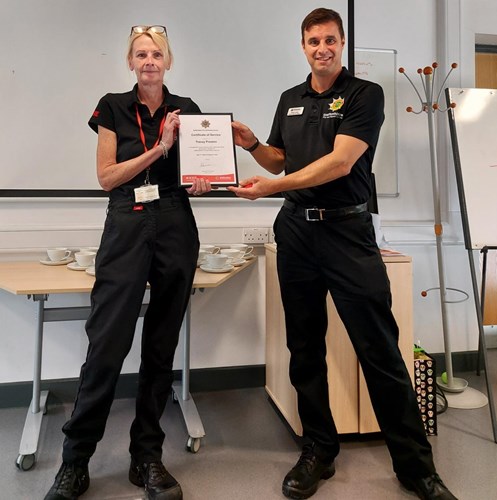 These are the words of Watch Manager Tracey Preston as she looks to retire from Staffordshire Fire and Rescue Service after more than three decades of hard work.

Tracey, who is based at Newcastle-under-Lyme station, first joined the organisation in May 1992, as an on-call firefighter in Cheadle.

She retired on 7 September 2022 after a total of thirty years and three months service.

Tracey became a whole-time firefighter in October 2000, before becoming a Crew Manager four years later, based in Longton. She spent almost 10 years as an instructor for student firefighters from 2005 and took on her latest role as Watch Manager in March 2020.

Reflecting on her time in the service, Tracey said: “There have been so many changes for the good over the years – all the appliances are much improved and people’s awareness of the dangers of fire in the home has increased significantly, as a result of the introduction of safe-and-well checks.

“I think it takes a certain type of person to be able to become firefighter.

“You have to be out-going, willing to do the job to the best of your ability at all times and happy to serve your community.

“It’s been a huge commitment, but it’s been well-worth it - making sure everyone in the community is safe and knowing you’re doing your bit for the people you serve.”

If you are thinking of a career as a firefighter, Tracey has this piece of advice: “I would say to anyone thinking about it – do it.

“You’ll love it and the sense of satisfaction you’ll get will be second-to-none.

“It’s a fantastic family environment, there’s a lot of support and help and so many opportunities for people to learn new skills.

“It’s a tremendous job – one for a lifetime.”

“I’m tremendously proud of everything that I’ve been able to achieve through the fire service, but most of all, I’m proud to have served communities in Staffordshire and to have helped people when they needed help the most.”

Rob Barber, Chief Fire Officer at Staffordshire Fire and Rescue Service, said: “Tracey has been an inspiration to so many within our service.

“I have worked alongside her and I know how dedicated and hardworking she is.

“Tracey has maintained the highest standards throughout her incredible 30-year career and I am going to miss her greatly, as many of her colleagues will too.”

Glynn Luznyj, Deputy Chief Fire Officer at Staffordshire Fire and Rescue Service, added: “Tracey’s work ethic and commitment to whatever role she has been performing has been inspiring.

“Tracey is one of those officers that others can learn a great deal from.

“We will miss her within the service but wish her and her family all the very best for the future.

“Thank you Tracey for your service.”