Local firefighters and colleagues at West Midlands Fire Service (WMFS) are urging the public not to engage in a recent social media trend causing emergency services to attend hoax incidents.

Over the last few days, videos of fake explosions have been posted on video platforms as part of a new way to prank friends and family.

The videos are created using special effects on a mobile phone and are causing members of the public to call emergency services as they fear for the safety of their loved ones.

The trend has seen people film various appliances around their homes such as kettles, microwaves and ovens to create the effect of a sudden explosion caused by one of the devices.

Crews at WMFS were first called to an incident in Tipton on 30 November after a man called 999 in response to one of the videos – only for firefighters to find out that it was fake.

Then, on Sunday (4 December), we took a call from a distressed mother who reported a house fire at her address.

She was out at the time when her daughter sent her one of the videos. Understandably, she feared for her daughter’s safety and called us as soon as possible.

We sent crews from Hanley, Longton and Sandyford to the scene – fearing a sudden explosion and the potential for serious injuries. Other emergency service colleagues from Staffordshire Police and West Midlands Ambulance Service also sent blue-light resources to help.

Once we arrived, we realised the incident wasn’t real. 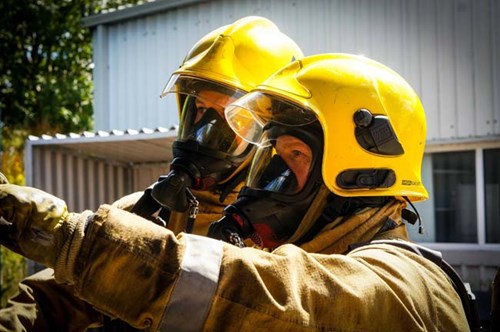 Although it wasn’t done with the intention of wasting our time, we understand the potential for this to happen again given the reaction of the caller at the time.

Head of Operations, Jim Bywater, said: “Hoax calls can create a great deal of disruption for emergency service colleagues across the UK.

“We know this particular incident wasn’t targeted at the fire service, but we want to show how this can develop and become a serious cause of alarm.

"Modern phones are brilliant bits of kit and are capable of doing lots of things. In this case, however, they are causing people to mistake fake videos for real-life emergencies involving their loved ones.

“Please don’t frighten your friends and family by doing this. It’s second nature for them to call us if they see something like this and it can result in widespread disruption and potentially a lack of resources to attend an actual emergency.”

Following the incident, emergency service colleagues spoke with the girl and gave their advice. She didn’t realise how this would impact on us and apologised to those at the scene.

Staffordshire Fire and Rescue Service and WMFS are calling on social media users not to create these videos or interact with them online. We advise that you report them to the appropriate platform so they can be removed.