The new cohort of firefighters began their enrolment into the National Firefighter Apprenticeship Programme, having applied before the coronavirus pandemic began.

The course lasts for 13-weeks and is designed to prepare the new recruits for all of the practical requirements of the role. The firefighters will complete a series of specifically-designed tasks, such as hose and ladder training, breathing apparatus, water training, prevent and protect, road traffic collision training and first response training accompanied by multiple assessment sessions. 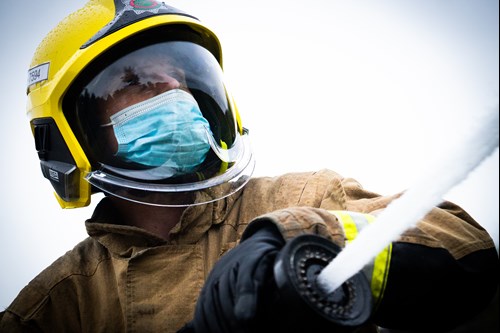 Chris Reyes, a 28-year-old firefighter in the cohort, said: “I’ve heard stories that thousands apply (to Staffordshire Fire and Rescue Service) and only a few get in, so I’m very happy to be here right now.”

Originally from the Philippines, Chris had previously served in the armed forces from the age of 18 to 23, operating as an IED Detector. He toured places such as Afghanistan, Germany and Cyprus, and whilst there became boxing Bantamweight Champion in the forces. Having enjoyed the uniformity of the military, Reyes found the desire to serve as a firefighter. He said: “The bond you get from working in the same uniform as someone is different to anything else.”

Prior to lockdown, Chris worked as a deputy manager in youth social services and later moved into mental health support work until his recruitment with Staffordshire Fire and Rescue Service.

Emily Bennett, a 28-year-old firefighter on the course, also said: “I really wanted to help change the opinion of women in the fire service. I read a few tweets in the past which weren’t helpful, so even if I can change one person’s opinion on that I’ll be very happy.”

Emily had previously lived in Staffordshire, Australia and New Zealand working in agriculture, until she applied for the role.

Kelly used to dress up as a firefighter when he was three-years-old, and completed work experience on Newcastle white watch before applying to the force aged 18. At the time, Kelly’s application was unsuccessful.

He studied a fire and rescue degree at University of Wolverhampton and ran a service called ‘Meals on Wheels’ for 15 months in-order to provide essential food to people in need. In the peak of the pandemic, the council funded organisation provided over 150 meals a day in the Stoke-on-Trent area, in partnership with the Royal Voluntary Service.

Once completed, Kelly reapplied for Staffordshire Fire and Rescue Service three years later, and was successfully accepted as a new recruit.

Upon completion of their training, the firefighters will be posted to a station in the county, where they will spend the next two and a half years developing their knowledge, skills and experience on call.