A three-year-old boy has told his Mum he “was a firefighter” after he and his father stopped a potentially serious wildfire in the Staffordshire Moorlands recently.

Ashley Hodson and his son, Ollie, from Leek, were walking through The Roaches on 20 July when they discovered the remains of a smouldering disposable BBQ. 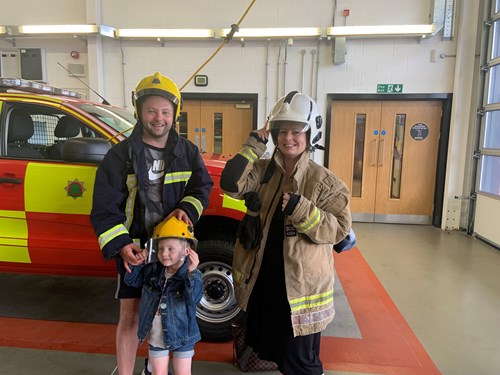 Ollie poured his drink onto the coals and covered it with sand to ensure it did not spread to the surrounding shrubbery.

As a result of the duo’s actions, Staffordshire Fire and Rescue Service did not have to attend the area and resources remained available for further incidents.

After Ashley took to social media to warn those against using disposable BBQs in the area, he was invited with little Ollie and his mum, to attend Leek Fire Station in recognition of their efforts.

Ollie was given a taste of what the job of a firefighter entails when he was shown around the brigade vehicles and how to use the jets - all whilst sporting his Staffordshire Fire and Rescue Service helmet, on Monday 15 August.

Watch Manager Terry Holdcroft said: “We have seen first-hand recently how dangerous wildfires can be in areas like The Roaches.

“Particularly in drier periods, fires can spread rapidly from discarded cigarettes, disposable BBQs and other naked flames, posing significant risk to both local residents and wildlife in the area.

“If not for the actions of Ollie and his Dad, this could have easily resulted in an uncontrollable fire which would no doubt drain significant resources and time to tackle safely.

“It was great to see Ollie and his family enjoying their day at the station and chatting with our firefighters who were keen to offer their thanks for their help in ensuring our communities are protected from the risks of fire.”

To read more on fire safety in the outdoors, visit: Safety outside (staffordshirefire.gov.uk)