Four crews descended on an accidental house fire in Stafford after a fireplace was left unattended.
We were called to an address near John Amery Drive in Stafford at 6.35pm on Monday 21 November following reports of a house fire.
Crews from Rising Brook, Cannock, Stone and Stafford were sent to the scene and immediately began work to extinguish the blaze. They used breathing apparatus to enter the smoke-logged building to ensure it had been evacuated before using a main jet to extinguish the fire by 10.30pm. 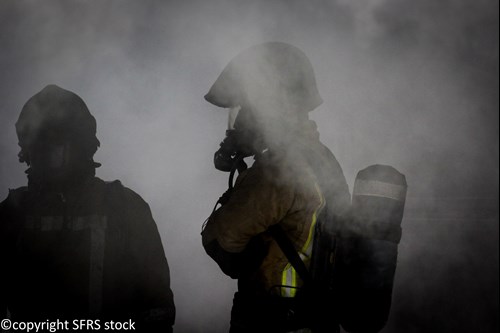 Paramedics from West Midlands Ambulance Service treated a man for smoke inhalation at the scene and transported him to hospital as a precaution.
We stayed in the area to conduct thermal scans of the building to ensure no hotspots areas remained. We also inspected the building and deemed the cause to be accidental.
A fireplace inside the home had been left unattended, allowing the flames to spread to surrounding furniture and ignite the room.
It comes shortly after we launched our “Be Warm, Be Safe” campaign, which aims to raise awareness around the dangers of heating your home during the cost of living crisis.
The service anticipates an increase in accidental incidents like this one, as more people look to save money and heat their homes using alternative means to central heating.
Watch Manager Daniel Streddar, who attended the incident, said: “Our firefighters worked diligently to minimise the damage caused by this fire and ensure those in the area were safe.
“As we head into winter, more people will be trying to stay warm and save money by burning logs and using traditional fire places in their homes.
“It is vital that you take extra care when handling naked flames in the household to ensure these accidents don’t happen.”
If you are burning wood inside your home, please:
• Only use dry seasoned wood
• Don’t store combustible materials next to fire places or log burners
• Use a fire guard to stop embers from spitting onto nearby surfaces
• Get your chimney regularly inspected
• Make sure the fire is fully extinguished before leaving it unattended

To read more on our “Be Warm, Be Safe” campaign, visit: Don’t make cuts to your fire safety this winter (staffordshirefire.gov.uk)